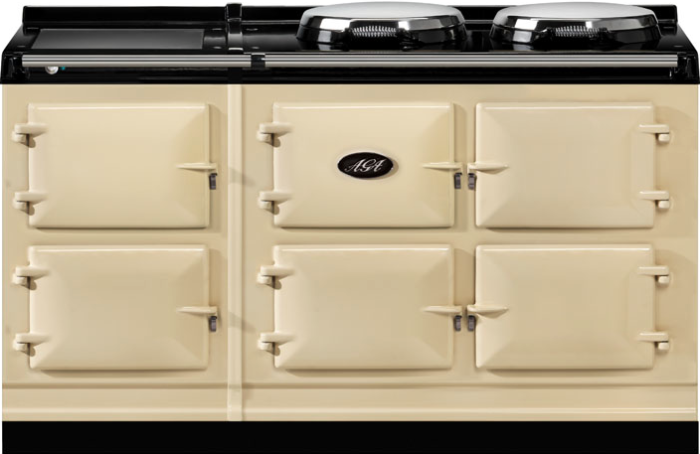 Cooking on the AGA Total Control cooker is a pleasure and produces amazing results. Its cast-iron ovens are gentle on food and lock in moisture, flavour, texture and, importantly, goodness - meaning the food you serve tastes delicious. Put simply, the AGA Total Control treats food as it should be treated - ensuring that you get the very best out of your ingredients.

From the exterior, the AGA Total Control appears to be just the same as the AGA cooker we know and love.

AGA State-of-the-art technology changes everything. It enables you to programme your AGA cooker to be on when you want to cook. Or off when you don't. Each hotplate and oven operates independently.

You can still enjoy that indefinable ambient AGA warmth while managing the amount of energy used. And in the summer months, you can choose to turn the AGA cooker off when it's not needed.

Control at the touch of a button

Discreetly housed behind the top left door, the nerve centre of the AGA Total Control cooker can be accessed directly or programmed via a remote control handset. Using the control panel, the hotplates and ovens can be turned on manually when needed. It's so flexible - you can heat only one hotplate or both. You can opt to heat only the roasting oven, the baking oven or the simmering oven - or all three.

…but the touch-screen panel does so much more

Alternatively using the remote control handset, you can even programme the cast-iron ovens to come on automatically for one or two cooking cycles per day, seven days a week. You can set the AGA Total Control cooker to provide the constant ambient warmth to the kitchen for which the AGA cooker is renowned.

Manual (you choose)
Each zone (an oven or a hotplate) can be operated individually in manual mode. Any zone selected will remain on until switched off.

AGA Slumber (ovens only)
In this mode all three ovens are active, pre-set at a simmering heat. Slumber setting is ideal for slow cooking and giving a gentle heat into the kitchen, creating that unmistakable ambient AGA warmth. When the ovens are in slumber mode, they take less time to reach full heat.

Auto (ovens only)
Selecting the auto function brings selected ovens up to full heat from off automatically when a programme is set. The ovens can be selected to operate once or twice each day, with the start and finish time of the 'cooking cycles' set by the user.

Auto slumber (ovens only)
Choosing this setting automatically brings the ovens up to full heat from slumber mode.

Each of the hotplates on the AGA Total Control cooker - the boiling plate and simmering plate - can be turned on or off independently as required simply by pressing the appropriate button on the control panel. Both hotplates are operated manually.

There are other innovations too. The patented engineering technology behind AGA Total Control means each hotplate is independently heated by its own element (International Patent Pending PCT/GB2011/050978). This means constant heat when the hotplate is on. This also means that using the hotplates does not affect the heat in the ovens, as each zone is independently heated.

The AGA Total Control cooker represents an important breakthrough in heat-storage engineering. Patented technology (International Patent Pending PCT/GB2011/050978) developed within our own research and development facility means that, for the first time, each oven has its own heat source. The result is increased programmability, more even heat distribution and more consistent oven temperatures. What hasn't changed is that this next generation AGA cooker still works on the principle of radiant kind-to-food heat, meaning that - just like classic AGA heat-storage cookers - it cooks beautifully, locking in flavour and moisture. This is the first AGA cooker to be part-assembled on a production line, meaning exceptional build quality and adherence to the highest production standards. Rest assured, however, that our skilled engineers finish the assembly in your home, maintaining our commitment to the very highest levels of customer care.

Powered oven venting - The AGA Total Control features an oven vent fan used when you are cooking in the roasting, simmering or baking oven to take cooking odours and grease vapours directly outside the house.

Each oven has its own heat source, meaning consistent oven temperatures.

Simmering oven - The AGA Total Control simmering oven is ideal for slow cooking, allowing flavours to develop and making even the toughest meats tender. Its large capacity allows several pans to be stacked and a number of dishes to be cooked simultaneously. From a cold start, the simmering oven takes around 45 minutes to reach its operating temperature.From the slumber setting, heat-up time is unchanged.

Baking oven - A moderate oven for baking cakes and biscuits cooking fish, lasagne or a shepherd's pie, the AGA Total Control baking oven is truly flexible. And cooking sweet and savoury dishes together is no problem as the flavours do not mix. From a cold start, the baking oven takes around 22 minutes to reach its operating temperature. From the slumber setting, this is reduced to approximately 15 minutes.

Roasting oven - The roasting oven on the AGA Total Control grills, roasts and bakes bread beautifully. But new technology means it is possible to use only the roasting oven or to use it alongside either or both of the other two ovens. From a cold start, the roasting oven takes around 35 minute to reach its operating temperature. From the slumber setting, this is reduced to approximately 15 minutes.